Often while exploring a new dataset in Clojure I use the excellent Incanter library. Incanter is a R-like platform for statistical analysis written in Clojure.

Now Clojure, on its own, is very powerful and very well suited to process and transform data as it includes a large number of data-processing functions on its core.

Incanter combines the power and flexibility of Clojure with a number of ready-to-use statistical functions and a simple way to plot charts using JFreeChart. Emacs + CIDER is the primary development IDE in Clojure-land, and if you have done any development at all in Clojure, the idiomatic way to do it is via REPL interaction.

So following the Incanter’s Getting Started guide you can create a project and fire up a REPL with Emacs with the following steps:

Then open the try-incanter/project.clj file and add the Incanter dependency:

Now you are ready to start the Clojure’s REPL with C-c M-j (or M-x cider-jack-in).

Once the REPL is ready a buffer will popup with the following content:

At this point you are ready to hack on your data. For example open the file src/try_incanter/core.clj and require a few Incanter’s namespaces and let’s plot something:

If you evaluate this buffer with C-c C-k it will create a new window on your desktop with a chart which looks as follow: 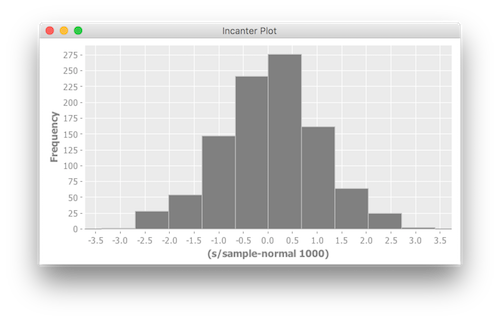 Annoyingly this popup (on a Mac) appears in the background, so you have to look for it and after a number of chart-plotting-steps your desktop might look just like this: 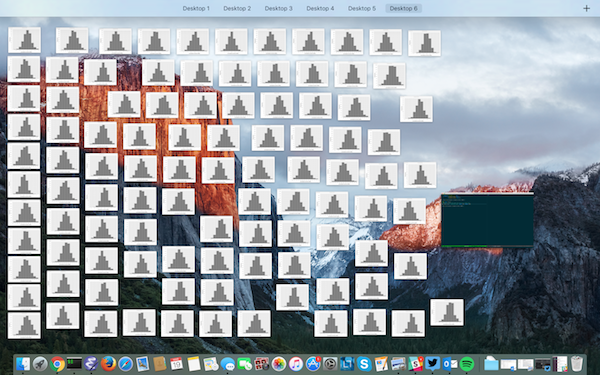 The continuous swapping between windows is irritating because you lose the REPL-momentum. One of the advantages of working with Emacs is that it is extensible in ways no other IDE system is. What I wanted was to be able to plot a Incanter chart and see the result directly in Emacs.

To achieve this, the first step is to render the chart into an image and save it into a file. Add the following lines in your src/try_incanter/core.clj and evaluate it (C-c C-c).

If we replace the i/view function with our own show function, rather than creating a new popup, a file will be created in your temp folder called /tmp/chart.png.

To be able to see image we need to hack a bit on Emacs. Open your *scratch* buffer (or your ~/.emacs.d/init.el file) and add the following lines.

Here it’s where the magic happens. Evaluate this buffer with C-c C-b (or M-x eval-buffer) and go back to your Clojure file src/try_incanter/core.clj. By pressing C-c C-i at the end of the following like a new buffer with the resulting image should be visible directly inside your Emacs. 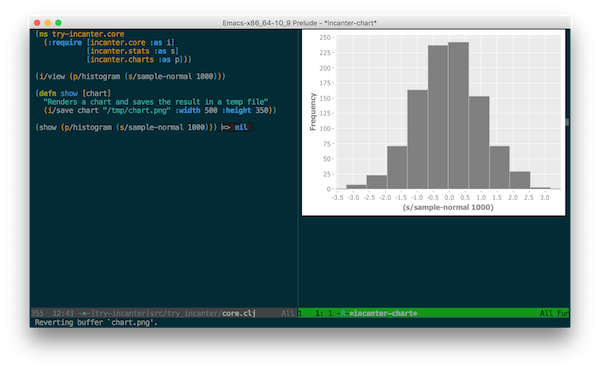 No more annoying windows appearing, no more switching, you can code and explore your dataset directly from Emacs.

This solution isn’t certainly a “clean” solution but just a “hack” to make my daily working routine with Incanter running a little smoother.

There are several other solution which I’ve also tried before hacking this one. I’ve used the excellent Yeldbot Vizard plotting library which I particularly like for its simplicity and easy REPL integration, however the number of supported charts is still quite small and it requires to transform the dataset from the Incanter format to the format it expects.

The other solution I’ve tried is the Gorilla REPL which is a iNotebook-like REPL for Clojure. Again pretty nice solution, but it doesn’t have the full power of Emacs and CIDER. If your are predominantly developing in Emacs you probably don’t want to move out of Emacs but you are going to try to bring everything else into Emacs.

My Emacs-lisp knowledge is still very poor so maybe there are better ways to do the same thing and I invite the more experienced Emacs hackers to leave a comment and suggest alternative solutions.

For example my first attempt was to render the plotted chart to a file and open the file directly in Emacs. Because I have the global-auto-revert-mode enabled, I was expecting that upon a image update, the auto-revert would have kicked in and the new image displayed; however what actually happens is that the image disappears and the binary content of the new image is displayed instead.

Happy hacking to everyone.